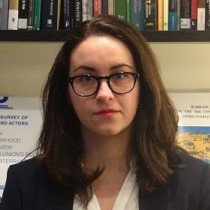 Cinzia Bianco is a Senior Analyst and researcher at Gulf State Analytics focused on the international relations, politics, and security of the Gulf region. After obtaining a Master’s degree in Middle East and Mediterranean Studies from King’s College London, she carried on a Research Fellowship in Oman, Qatar, the U.A.E., and Kuwait for the European Commission’s Sharaka project. She is a regulator contributor to several think tanks including the NATO Defense College Foundation and the Euro-Gulf Information Center. She has also contributed to publications in the U.S., Europe, and the Middle East. She is currently undertaking a PhD at the Institute of Arab and Islamic Studies at the University of Exeter in the United Kingdom on security perceptions in the Arabian Peninsula after the Arab Spring. .

From the Gulf to Europe: Exporting Islamic Finance (with Antonio Occhiuto)